Georgetown, the capital of Williamson County, is a city in the United States located in Texas. According to the 2010 census, the city had a population of 47,400. The city was founded in 1840, at the same time as one of the oldest in Texas, the South-West University.

In the city there is a number of residential and commercial buildings made in the style of Victorian. In 1976, the local authorities adopted a decree recognizing the historical and protecting the central business area, and in 1977 the district court district of Williamson was registered in the National Register of Historical Places.

Georgetown is also considered to be the capital of red poppies. The annual red poppy festival held in April on the historic square of the city attracts up to 30,000 tourists every year. 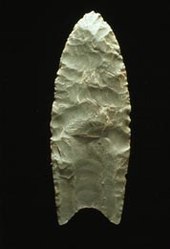 A blade created by the people of Clovis, about 11,000 years old.

Georgetown has been a human habitat since at least 9000 B.C., and perhaps much earlier. People lived here already in the Pleistocene era and were part of the Paleo-Indian culture of Klovis, which was characteristic of the production of original Klovis tip. It is known that people in the region have lived since 9200, and possibly since 11 500 BC, since the end of the last ice age. One of the important excavations is the preserved skeleton, named "The Lianderthal Lady" after the period of residence and the nearby town of Liander. The site is located just south-west of Georgetown and was chosen by accident after officials from the Texas Department of Transportation discovered valuable discoveries during a test drilling for the new highway. The site has been studied for many years, the age of the carbon samples here dates back to the Pleistocene era, about 10,500 years ago (8,500 BC). Archeological findings from the archaic period were found in different parts of the district, mostly along waterways, including the San Gabriel River Georgetown.

The Tonkawa tribe was one of the first Indian tribes to settle in the district. The Indians owned silicon tools and hunted bison, periodically setting fire to hunting prairies. In the 18th century, the tonkavas began to use horses and, to a limited extent, firearms. In addition to the Tonkawa, the present district also included people from the Kaiowa, Yohuan, Tawakoni and Mayaye tribes. Most Indians were displaced by colonizers, but the commandos continued to raid settlements in the district until the 1860s.

Cullen building on the campus of the University of Southwest shortly after completion (about 1900).
Burkland-Frisz, built in 1900-1910, was moved from Roundt Rock in 2006 and now lies on the southern bank of the San Gabriel River

Georgetown was named after the entrepreneur George Washington Glasscoke, who donated land for the new city. Early American and Swedish pioneers were attracted by plenty of wood and clean water. Moreover, the land was inexpensive and very fertile. Georgetown became the administrative center of Williamson district, formed on March 13, 1848, after the first settlers applied to the legislature to secede from the Mailam district. Originally called San Gabriel, the district was named after Robert Williams (nicknamed Three-legged Willy), a Texas statesman and judge.

For almost the nineteenth and early twentieth centuries, Georgetown was an agrarian city. Through the center of the city was the Sonia Trail road, which runs from Texas to the Kansas and Missouri railway centers. The establishment of the South-West University and the construction of the railway in 1878 contributed to the growth of the city's population and importance. The stable economy developed mainly through agricultural activities. Cotton was the dominant crop from the 1880s to the 1920s. Williamson County was the best cotton producer in Texas

Two national railways were built in Georgetown, primarily for the transportation of livestock and cotton: Grand North Railway, later combined with Missouri-Pacific, and Missouri-Kansas-Texas. In 1904, the Georgetown and Granger (GGR) regional railway was established to Austin. Currently, Georgetown is served by a short segment of the railway with the same name, a short line that connects to Union Pacific in Roundt Rock and in Granger.

In 1921, a low-pressure system from a hurricane in the Gulf of Mexico produced more than 23 inches of rain in Taylor and 18 inches of rain in Georgetown. About 156 people, mostly farm workers, disappeared during the flood. The significant damage and deaths in the district have shown the need to control the flow of water in the city. As a result, a dam was built on the northern part of the San Gabriel River and the Georgetown Lake was officially opened on 5 October 1979. Georgetown and Roundhock have the right to use the lake water.

Until the 1960’s, the growth of the city's population and industry was weak. But along with the growth of big Austin, Georgetown is accelerating. In 2008, Fortune Small Business recognized Georgetown as the number 2 city in the country to "live and start" a new business. 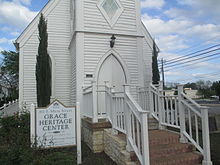 The Georgetown Heritage Center is located in a former church building in the city center. 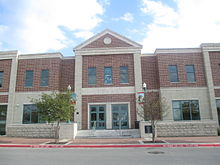 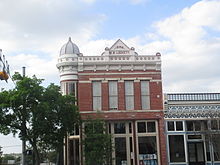 The city is located on the northeast edge of the region called Hill Country, and is located on both sides of the Balcones fault, which runs approximately along the I-35 motorway, characterized by the fact that the land to the east consists mainly of black fertile clay, whereas to the west of the fracture the carstoid rocks, covered with a thin layer of soil, dominate. An example of a large karst formation is the Inner Space Caverns cave.

The northern and middle branches of the San Gabriel River run through the city. There are many recreational parks along the banks of the river, as well as about 50 kilometers of hiking and cycling trails.

As in much of the central state, the climate of the city is characterized by long and hot summers and a cooler mild winter. The average maximum temperature in July and August is more than 38 degrees Celsius, and the temperature of +30 degrees can be reached in October, despite much colder nights.

In winter, the maximum daily temperature is 10-15 degrees, sometimes falling below zero. On the other hand, the temperature in January may rise to 20, and in December to 25 degrees.

On average, in autumn, winter and spring months there is from fifty to eighty millimeters of rainfall. During the summer months, it falls from twenty to fifty, mainly because high pressure is driving clouds away from the Gulf of Mexico.

The construction of the I-35 interstate highway through Georgetown was a clear factor in the city's economic development. Originally, when planning the motorway, the route through or near Taylor was given higher prioritywhich was then the economic center of Williamson County. Although Taylor's government supported the construction of the highway in the city, local farmers, fearing a 100-meter-long highway would divide their holdings and restrict access to fields, opposed the construction. Farmers and locals also feared noise from the new road. On the other hand, the authorities of Roundt-Rock and Georgetown actively lobbied for a route through these cities, along the fracture of the Balcones. Later, it became the U.S. number 81 motorway and then the interstate I-35 motorway.

The second largest event affecting Georgetown's economic development was the construction of Texas's first retiree community area, Sun City Texas, belonging to the San City community builder Dela Webb. The district was reopened in 1995, despite protests from local residents, who feared the area's size, its impact on the city's family at the time, an increase in service costs, and changes in voting power at the expense of new residents. As of 2010, more than 11,000 people live in an area of 21 km2, with an average wealth of more than a million dollars per person. According to research, economic stimulus, a sales tax, a good banking and investment climate, and high levels of public support and volunteering have had a huge impact on Georgetown's economy. In 2007, Georgetown was recognized as the best city to retire with the publication Retirement Places Rated (seventh issue).

In the spring of 2014, Georgetown's largest employers included:

The city council consists of seven members of the council elected on the territorial principle and the mayor elected on the whole city. For each post, candidates are elected for a term of three years, with elections in different districts taking place in different years.

The Williamson District Court building was renovated in 2006-2007.

The town is served by the independent school district of Georojtown and Georgetown High School has received a national award under the National Blue Ribbon Schools Program.

Georgetown is also home to the South-West University, one of the oldest universities in Texas, founded in 1840. The University is a branch of the United Methodist Church, although the curriculum is not limited to one religion. The university is accredited by the Association of Colleges and Schools of the South, and the National Association of Music Schools of the USA. It offers 40 bachelor programs in art, science, fine arts, music and mixed and pre-professional programs.

This list was provided by the Texas Film Commission: